When I was young, my father fell very ill. So ill, he turned yellow. Jaundiced, is the medical term. HE was yellow, his skin was sallow and the white of his eyes, the most telling evidence of this change, were a very unwell yellow. He lay recovering in bed , camouflaged in sheets as yellow as he was. Surreal overexposure and total reign of yellow.

I have been diligently focussing on yellow this week and in doing so, that memory of my yellow father surfaced.  Like a yellow submarine. 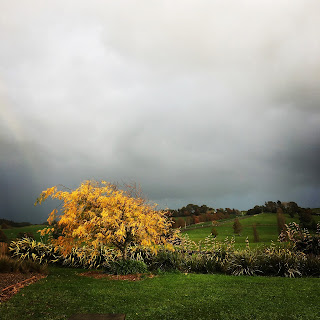 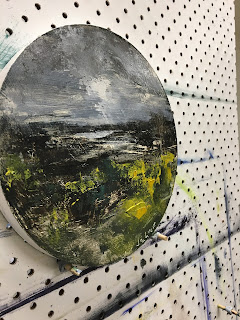 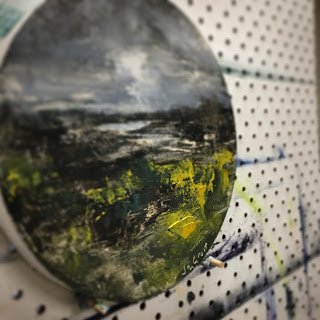 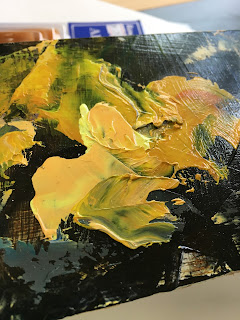 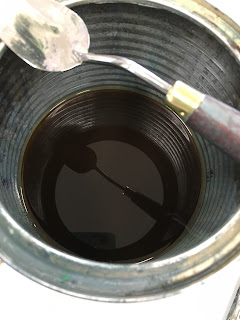 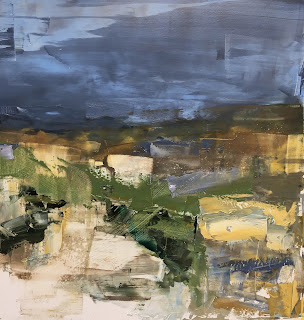 Autumn is well and truly here. Yellow reigns in the garden. The Gleditsia tree thinks it's at the Met Gala Ball and is positively glowing in her dress of gold-leaved finery.

When Spring comes, the terrible Gorse will spring forth with it's blooms of acid yellow.

I have no yellow sheets in my linen cupboard. My fathers eyes are bright white.

Posted by the distracted painter at 6:30 PM No comments:

Yellow is one of those weird colours on my palette. I consistently use it IN a mix and rarely on it's own.
Cadmium Yellow Light
Cadmium yellow Medium
Indian Yellow
Yellow Ochre

I like yellow, but I own no yellow item of clothing. The thing that may be considered the yellowest item of clothing is a sad t-shirt that is probably yellow from age. I am only just beginning to wear green after wearing blue for so long. The yellow seeps in slowly.

Turner and Van Gogh are the artists I think of when I think of yellow. Klimt too, but he was more about gold.

I see yellow as a challenge. One of those mindfulness exercises that I set for myself: Use yellow in a painting. Use it today. 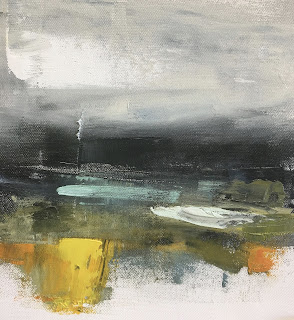 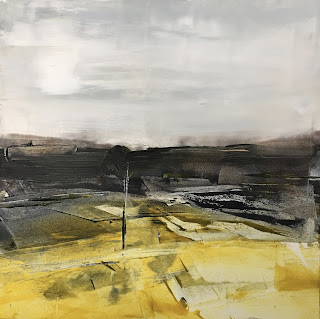 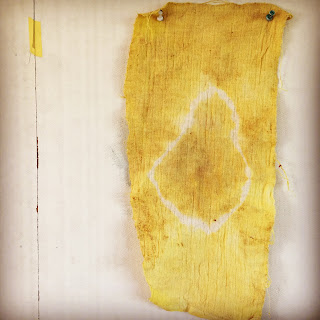 Muslin used to hold spices when I made a curried chutney
Inadvertent pear.

Alex Kanevsky wrote a lovely piece about yellow.
He titled it: Yellow.Reluctantly since 2006.

Yellow is difficult. But it seemed easy to Van Gogh. Maybe I should spend some time in Provence. Pierre Bonnard said that you can never have to much yellow. Yellow was one of the four colors found in Piet Mondrian paintings. Indian yellow was originally made from cow urine but not anymore. Its powerful tinting ability makes it very hard to control. Yellow is the color most susceptible to dramatic changes from even smallest additions of other pigments. Naples yellow ranges from astonishingly ugly to very beautiful, probably because nowadays it is a mix, and its composition depends on the maker’s preferences. It is one of the oldest synthetic pigments, dating from around 1620. The actual pigment is toxic, like many good things in life. I always have a tube of Cadmium Yellow (how could you not?) but almost never find any use for it. Yellow is the first color to fade from the sun exposure. White paper and fabric, on the contrary, turn yellow from exposure. Nobody uses yellow in paintings sparingly and reluctantly. It is either with abandon as did Turner, or not at all. Matisse was not afraid of yellow, but I wouldn’t call it an embrace. Morandi stayed safely within Naples Yellow and Yellow Ochre, only rarely venturing into insane Cadmium Lemon Yellow excursions. Zinc Yellow used by Seurat was unstable and turned brown. Although the leader of a stage in Tour de France gets a yellow jersey, he is not considered the winner of the yellow jersey, only the wearer. Yellow is the first color introduced into fresh white snow as dogs are taken out for a walk early in the morning. In Russia, a colloquial expression for an insane asylum used to be "yellow house.” At the moment, my favorite yellow is Sennelier’s Light Yellow Ochre that also has a wonderful german name “Gelbocker Hell”.

I shall continue to use yellow.
I like it because it's not natural, feels weird. That seems as good a reason as any.

Posted by the distracted painter at 8:44 PM 2 comments:

How I almost qualified for a Darwin Award

Let me tell you a tale of stupidity…my own.Last night, on ,my way to bed( I seem to be the first into bed these days) I passed Julius playing on the swissball in the corridor.“Watch me, watch me he pleaded. Good parents should watch their children, so I did.
Bracing himself against the two side walls of the corridor, he stood on the swissball and then tried to let go and balance. He managed for a second or two. Then he grabbed the walls for support again.“That looks cool! “I said” I want to have a go”Now, this is when the judges of the Darwin awards all pulled up and watched, scorecards at the ready.
I began my attempt to stand on the swissballx  Background  info is that I have not done any swissball exercise in over 2 years, not yoga in 3 months, am unfit, chubby and frankly, totally unfit for any kind of gymnastic feat.
The ego, however, was a fucking olympic athlete. That was how that quick inner conversation went.
I stood up on the ball, hands bracing me on walls either side. When the ball sagged under my weight, I should have dismounted. “You are as lights a feather” shouted my ego, hands covering my eyes and dismissing the fear department who mentioned , quietly , that the ball MIGHT explode.I was up! I was standing!“You are fucking awesome” said the egoThen Julius stepped back and in a split second, everything changed.I had not realised Julius was stabilising the ball with his leg.The ball SHOT forward.I SHOT backwards............ and down.Paint shot through so many places. I hit the floor :elbow, ribs, head…in that order.Things that should NOT go crunch went CRUNCH in my neck.I lay very still. Shocked.That was a lot of shit that got shot in a very short amount of time.My head hurt a lot. Those crunching noises in my neck freaked me out and I could not comprehend what had just happened. More than that, I could not comprehend how I had failed to anticipate the outcome.Hindsight works fast.I lay there for a good 5 minutes, assessing damage, going through the events in my head and mentally and physically prodding around looking for signs of real damage.I am still sore this morning but INCREDIBLY grateful that I seem to be ok. Sore ribs, sore neck, bruised ego and sudden realisation that my reactions are those of an older person and not a 20 year old have left me a bit quieter today.I may go back to the yoga mat. I need to work on my balance.

My ego is doing a downward dog as I type.

Painting will be slow going this morning but I will be out and about on saturday for the planned plein air paint out in Hamilton Gardens.