I am not very DIY inclined . Saying that, I do have a Pinterest account full of clever things to do and make if only i could, say, use a saw. That Pinterest addiction and the exposure to waaaaaaay too many clever projects has opened some kind of Pandora's box of curiosity about DIY. A Glasshouse made of old wooden windows?! Sure, I could knock that together. Raised Garden Bed?Totally doable! Garden furniture with something clever built in somewhere? Sure, why not. A million projects for a palette?????Hell, yeah. And don't even start me on my sewing projects. But I digress....

I also want to be able to be more self-sufficient and do more of my own cutting of boards to paint on etc. To know how to do basic DIY and work a saw should not be too far out of my capability.

Now usually, I start muttering things about machinery and DIY and Charles shuts me down with the reminder that it's quite dangerous and possibly I have more to loose (Digits, an eye, my dignity) that I have to gain. Curiosity is a cat I know well.It has led me down many paths and a few have been a bit wild. But Charles is not here. Charles is riding motorbikes in Australia with the Romanian Photographer and the Naughtiest Man alive. The cat went shopping.

...and bought a circular saw. And board. And hinges. And some other wood thingies I thought would be useful. I forgot screws.

Then I came home , unpacked the thing and went straight to Google" How to use a circular saw". You tube, I thank you.

A few hours later I realised I was short of a few things. A saw horse or two, clamps, safety goggles any experience.So I alarmed my dear neighbours by borrowing their sawhorses and clamps and asking for a live tutorial on circular saw usage , with focus on what NOT to do, too. Brian is a saint. He gave me the tutorial and left.

I enlisted Julius to help me because he HAS actually used a saw before. He is 12. I must admit to being a bit startled at the realisation of how MUCH he knew. He advised me on technique (start the saw before you hit the wood) hat and encouraged me not to chicken out half way through the job. He even worked out a more efficient way to deal with the project of cutting the hardboard.

I was crap at it. The early learning curve is very, very steep. Thank goodness I realised this quickly and lowered my expectations of my DIY Skills from" Rehab Addict" to " Cowboy builders" . Also, DONT'T saw hardboard indoors, it gets everywhere (like a dusting of "what the hell were you thinking dust" on every surface of the entire room. that is going to remind me for days) Also, what you really should have bought is a table saw, a drop saw and a handyman.

But, I did cut the board

I made some mistakes. I chickened out of one cut half way.

I had to restart and forfeit that piece of board.

I stopped cutting 1 cm too soon on 3 cuts. Slow learner, but I did learn.

Modern clamps are so easy to use!!!! I remember those crappy metal vice clamps..the new ones are fancy!

Did I mention fine sawdust?


But I DID cut it and they will be perfectly good boards to paint on....and trim IF I want to frame them. Sigh.

My other neighbour has a table saw. I might go ask if I may have a tutorial on the table saw.......

Charles is home next saturday so my window of opportunity starts closing soon.

Oh, and I was selected for the Arts Gold Awards 2017 with  painting inspired by an exhibit in the Central Stories Museum in Alexandra.

There is a heartbreaking letter attached to an anonymously donated knife sheath and leather strap in the Museum in Alexandra . The letter is from a dying father in England to his son prospecting for gold in Roxburgh, Otago. In the letter , the father farewells his son James with great love and affection but simultaneously  cuts him off financially . He explains that they are destitute if they help him and no more money could be sent to support him and his . This poignant letter, dated 1862, has stayed with me for years. What happened to either is unknown. The area around Roxburgh is unforgiving, especially in winter and I imagined the grief both men felt at the finality of that letter. This work is my interpretation of that story.

Posted by the distracted painter at 1:48 AM No comments:

All the works for my upcoming exhibition with glassmaker Di Tocker at Gallery de Novo in Dunedin are completed. And when I say completed, I mean signed, varnished , named and photographed. Seriously completed. Done. Dusted. Done and dusted.

I have moved them ( all 20 pieces) out of the studio into the room I annexed specifically for completed work...shall we call it a the viewing room?...and now there is a vacuum in the studio. The space that was filled with months and months worth of work...is now empty. The thing is, I feel empty too. I love the work. I am happy with it, but I thought I could move straight on to new work...and I cannot.  Di tells me that I need a break and to enjoy the time, but it has come at a time when a break is NOT what I want! I want to work! I want to paint! Charles is away on a three week trip through Australia, the boys are engrossed in school and studying....its the perfect time to be engrossed in painting, unapologetically , 100%, forget to eat,bathe and drink into painting...and I'm spent. I need a break, like it or not.

So, tomorrow I begin my break from the studio.

I have no idea what I am going to do, but if I pitch up on your doorstep, be nice. Make me a cup of tea, show me something interesting, give me a book you think I would like to read ...whatever, just throw something at me and let's see if it sticks.

The universe keeps saying "Tasmania" to me. I am going to chase that lead. 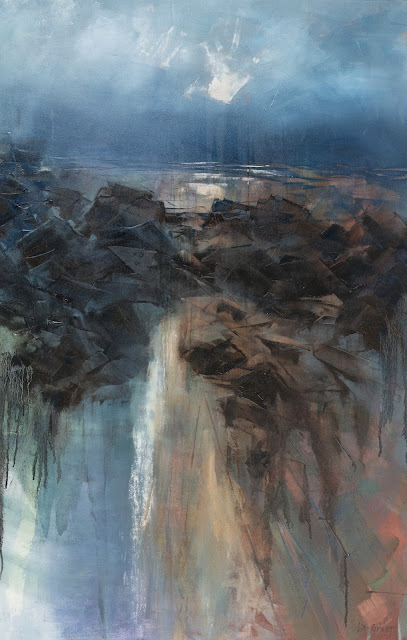 This one is called " Chasing Waterfalls"


Posted by the distracted painter at 12:15 AM No comments: