Traditionally used at a wedding (when dressing a bride), this little ditty held true for my visit to the latest exhibition at the Auckland Art Gallery, The body laid bare : Masterpieces from the Tate.

I had been rather keenly anticipating this exhibition and FINALLY managed to wrangle a free day in my schedule to travel up to the big smoke and visit. I have a great love of the figure in painting although I do not, as a rule, use the figure in my work.  I invited the lovely Jenni Stringleman to join me and she has the joyous commute of a hop on the ferry from Devonport over to the City itself.

Viewing an exhibition with another is so good for understanding. Her perspective and mine are different( she paints a good nude!) and yet we both exhaled with pleasure and awe when we came across some works that were clearly quite extraordinary. In one room, several heroes were gathered on the wall: Lucian Freud,  Francis Bacon, Cecily Brown, Willem De Kooning. We circled Rodin's sculpture "The Kiss", marvelling at the detail, the lack of it, the sheer enormity of the task, the lost and found edges in that entwined , iconic sculpture. David Hockney, Tracy Emin, Alice Neel...the names ...Bonnard, Matisse, Picasso....Henry Moore, Barbara Hepworth, Cindy Sherman....names, BIG names. And in front of us. We scrutinised, pointed fingers, oohed and ahed. We spoke A LOT. Not for us the hushed , reverential discussions. We were too excited and engaged for that.  We wondered what would shock us( if anything did) and were both surprised when we each found the thing that pushed that particular button. And for each of us, it was quite different. It was nice to be a bit shocked again. It's been a while! We circled through the exhibition twice. Flesh junkies.

Then off we went  to meet Jenni's lovely husband Dave for lunch. He took us to a newly opened restaurant on the waterfront where I has some  fish carpaccio thing that was delicious( I was too busy talking to pay attention to the meal name. "I'll have what she's having "was what seriously came out of my mouth when it was time to order) and we nattered until it was time for Jenni to catch her ferry home. Dave had to listen to us gabble on about flesh and paint and ideas and colours . The man is a saint.

No photos, (which I think was stink).
But all this makes me think of the figure and gets me excited to consider it again.
It's there, in the back of my mid, but I am a way from including it at the moment because I have not yet worked out or have clear understanding of what that figure would be. I greatly admire the work of Euen Macleod, Kevin Sinnott , Alex Kanefsky etc who place the figures in the landscape with such particular reason. I don't have that reason yet, so , till I do, I don't go there.

News:
I am exhibiting this easter weekend at the Baffin Street Gallery with Hillary Ramage, Carole Shepheard, Tai Meuli. 15/16 and 17 April, 9.30 am till 5 pm.  812 Baffin street Gallery ,Pirongia . There will be a closing event Monday 17 April at 3 pm, should you wish to attend and meet the artists. Yes, me included. 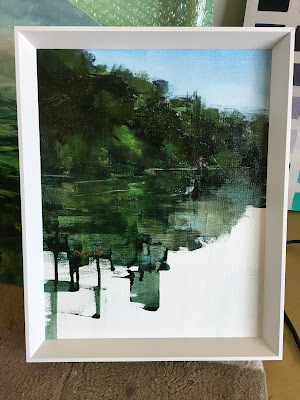 River Fisher will be there!

I hope the cyclone will have passed by then!

Ps. I told my boys I was of to Auckland for the day. Bored faces looked back at me.
"To see the nudes" I declared. They both flinched.
"Nudes?!?" they echoed.
" Yes, from the Tate. Borrowed nudes"

Eldest then says" I may reconsider my opinion of art galleries"
Youngest" Nudes?!?"


Posted by the distracted painter at 10:08 PM