My studio easel is a Mabef monster that operates on a ratchet system to raise and lower the height of the shelf. Now, I am not sure if "ratchet system" is a real term, but thats what I call it. To raise or lower the painting shelf(yes, I may have made that term up too. Go with it) , one has to pull a pin thingy and either push up or lower gently, ratcheting down the ratchets till you get to the place you think ideal. (It never is, but thats a different tale of woe.)
It requires certain angles of leverage to be just so and I am fairly good at gauging it, but not this time.

I have some largish canvasses on the go at the moment and yesterday I needed to raise the level to work on the bottom of the canvas. Monster canvas on the easel, it's lardiness disguised as mere wood and canvas airiness, I casually leaned down , pulled the pin out and then WRENCHED THE SHELF AND THE CANVAS NORTH.....and nothing happened. The Canvas and the easel remained unchanged . Something DID , however, happen to my back.

So, yesterday was spent alternating hot water bottles and ice packs (hideous torture, what mad fucker thought that up?), guzzling ibuprofen and tea and wailing a little.

Now, please do not inundate me with tips on lifting heavy objects, unhelpful instruction to try yoga or
some arcane homeopathic remedy. I KNOW how to lift heavy objects(theoretically), I yoga REGULARLY and I am all for an arcane remedy if it includes booze, but THIS type of injury was an accident and it requires the remedy that can only be offered by shopping.

So, I need a new easel that has a crank.

NOW you may offer a suggestion. 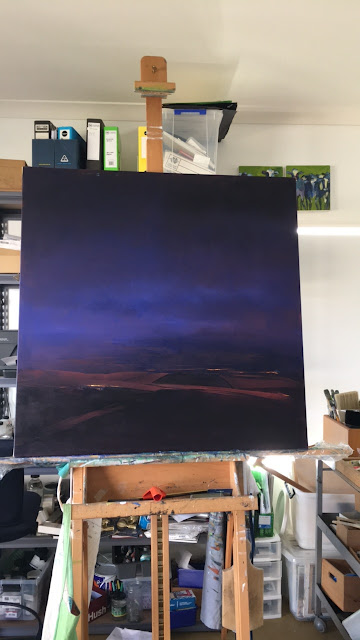 Posted by the distracted painter at 3:53 PM