My first pint of Guinness and other stories

A few years ago I identified a painter whose work I admired and who was painting in a way I found compelling. I wanted to find out a little more about him and discovered he was a professor at a university in Minnesota BUT he did teach workshop in Ireland over the summer break.  The Ballinglen Arts foundation in Ballycastle, Co.Mayo, Ireland, was founded some 26 years ago by two american gallerists who established the foundation to bring artists of recognised ability from both Ireland and abroad to live and work in Ballycastle. Their residencies are famous and the list of Fellows is a bit of a who's who of contemporary painters . Andrew Wykes is a fellow and has had several residencies there and now teaches some workshops. The workshops are a fairly new arrangement and suit the likes of myself who can only pop over for a few weeks, not a few months.

Because I am not one to go on adventures alone( it's boring! Who will I talk to?!) and every Han Solo needs a Wookie, I asked Michelle Ives to join me and what an excellent decision that was. We all know Chewbacca is the reliable one.  Michelle lives in Glasgow, and so the plan was for me to to fly to Glasgow and recover from jet lag( more on that later) for a few days , then fly to Dublin together and drive cross country to Ballycastle and return 9 days later, better artists.

So we did just that.

We arrived late on the first evening, the last of the group of 10 and were welcomed to a late meal around a table that would become a regular fixture of good food and fun figures. Understandably, there were a good few american artists ( Ireland being only a hop skip and a jump for many) and two from Italy and one Brit. Michelle grew up in South Africa, like me, lived for 14 years in Wales and has lived in Scotland for 6 years. Who knows how we classify her!!!
Introductions were made, wine was drunk, we hit the sack and slept like babies, ready for day one.

We hit the ground running and headed to Downpatrick head to draw . Draw rocks.  It was hot! Who forgot to tell Ireland I had packed for DISMAL weather!I had woolen trousers, waterproof shoes, fleeces, beanies and raincoats.  I almost went swimming.I would have drowned in the wool, though. 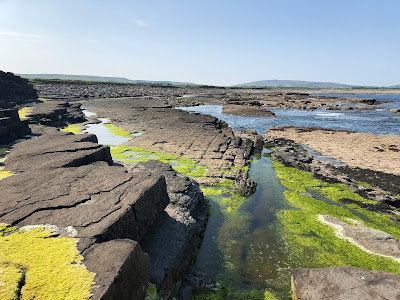 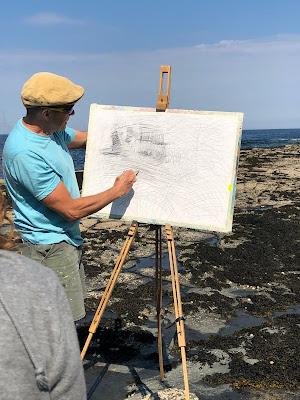 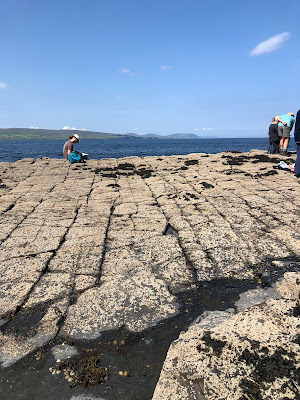 Back in the workshop space we popped our drawings (there were several) onto the walls and discovered that drawing pins were useless when trying to get those puppies up on the wooden walls. We had to wear shoes because the floor was littered with bent drawing pins and the ashes of the expletives that followed a session of pinning.
NOTE TO SELF: line a workspace with stuff you can pin work into easily and save yourself some drama. 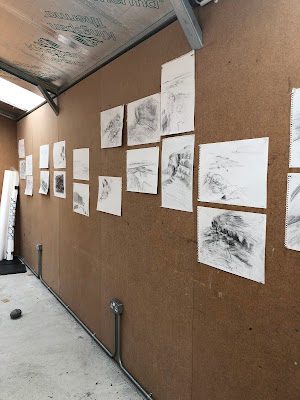 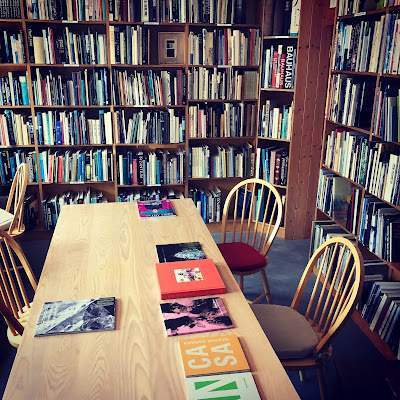 The library at Ballinglen arts foundation is a treasure of art books. I camped out here a lot.

The workshop was 7 full days of tuition, 9 till 5, with an hour for lunch. We rarely took the full hour and only once did I slink off and doze under a tree in the garden .....but that was early days and I blame it on the jet lag and excitement.

We drew every day, over and over again, outside if the weather was good, inside from references drawn outside if weather was bad. We drew small, we drew big, we made mess, we raged and roared a little and at the end of each day, after dinner, we retired to the pub and drank a few pints( or half pints) of Guinness and got to know each other a little better. The publican was a man called Patrick but it was pronounces Porrig, had an accent so thick I thought I was having a stroke each time he spoke to me . I knew what he was saying but didn't, all at the same time. (Or maybe that was the Guinness. ) I know I said" May I please have 3 half pints of Guinness" and he said" brrr good dggggroooode aaaaagh euro"  I knew he was asking for money because Euro sounds like Euro in any accent. And thats how ALL my interactions with him went. Eventually, I felt we might descend into charades. I was prepared to go there. No one should have to work that hard for a drink.

Anyway, so the days flew by. The longer we spent time in Mayo, the more dire the weather became.  I went out painting with my little pochade box every morning at 6 am because the light was gorgeous and I was awake.(thank you jet lag) I dragged Michelle with me and housemate Anne, who had never panted plein air and got into the swing of things. Michelle was invaluable as a insects attractor whilst I  avoided being bitten by the legendary irish Midgies. She was devoured and sprouted red bumps like a measeled child, poor girl. The sun rose just after 5 and only set after 10. It was crazy beautiful.

I fell in love with the lady next doors washing line. 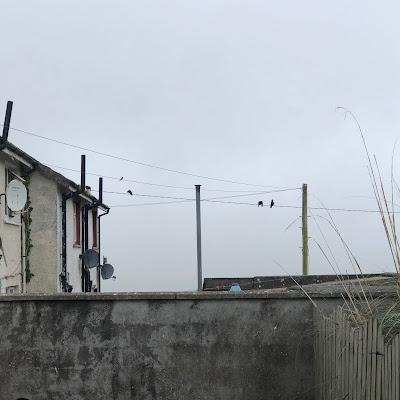 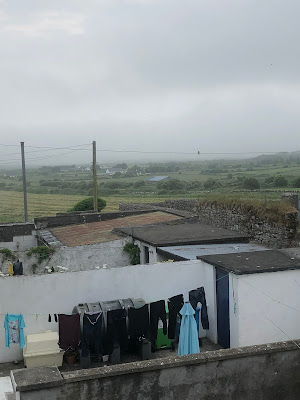 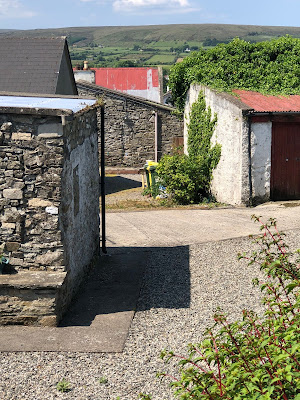 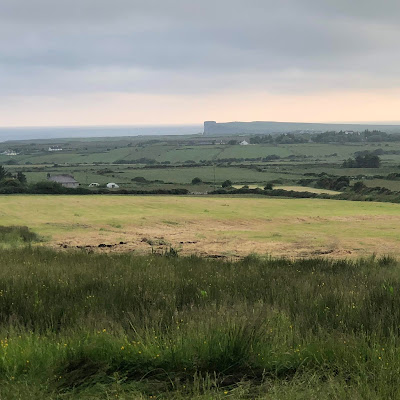 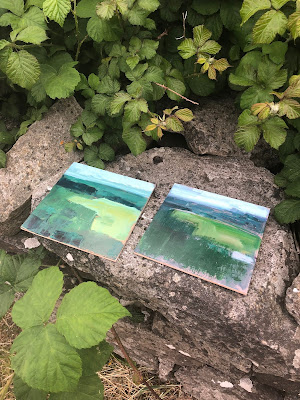 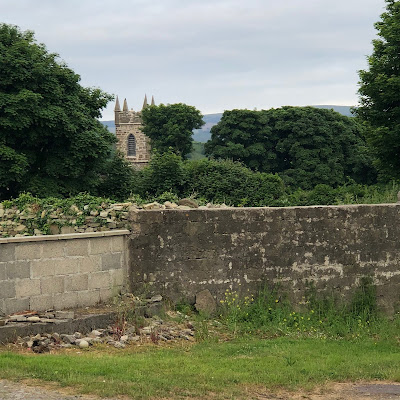 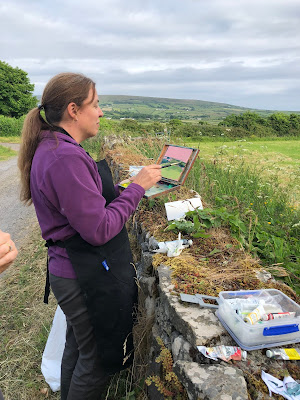 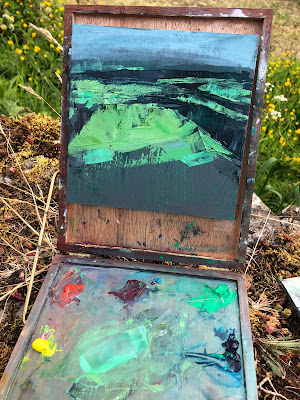 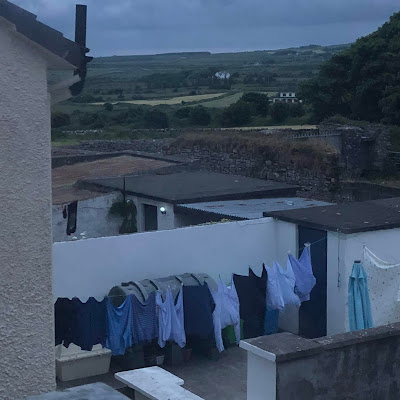 And that was day one and a story about the pub. More will follow.


Posted by the distracted painter at 3:24 PM