After a second breakfast or early first lunch( sorry, Hobbit reference) and buoyed by our early success, Richard suggested we climb to the top of a small hill and paint the next cove along, called Shelly beach. I ditched some of my equipment, the extra canvas panels, and by mistake, my palette!

After a climb through chin high grasses we set up looking down onto the beach but also with an amazing view of just about everything else in sight. 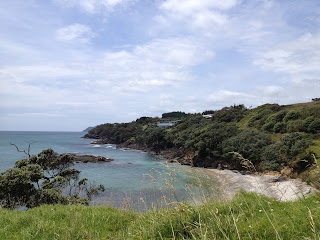 What to paint, or rather, what NOT to paint. Richard had earlier explained how painting a scene should be akin to describing it in poetry. He described his plan of action and chose to focus on the small beach area rather than the whole vista, as it presented itself to us. I nodded, grateful for the direction and insight.

It was too windy for the umbrella's and we knew we were going to battle the sun and yet we forged ahead. I was deep in thought , painting away, adjusting values and examining colour choices, when he suddenly threw his canvas across the grass and jumped on it a few times. His water bottle came out and he liberally doused the whole thing then , declaring himself satisfied, popped it back on the easel. What a laugh! 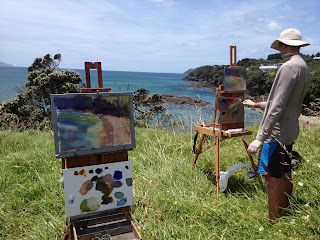 We painted for a while longer and then I realised my eyes were starting to get sore from the glare of both canvas and the canvas palette I had to improvise....I knew I was flagging. We took the opportunity to chat some more and he described something he called " abstract expressionism".....and the lightbulbs went off in my head again! I get it! 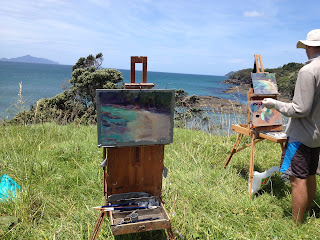 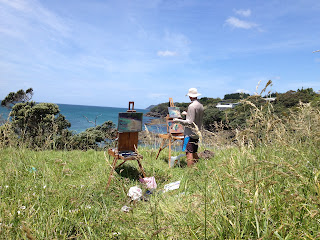 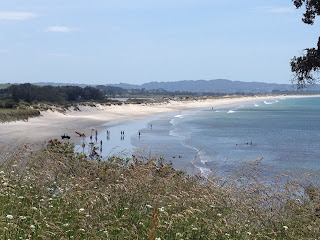 The last photo is of the beach, the other side of the hill, at Waipu.

We finished off, carrying our completed paintings down over our heads to prevent the long grass heads adding to the brush marks on the canvasses. My completed painting contains a few bugs and some authentic Northland grass seeds!!!

I love my painting, not because it is especially good, but because I had such a good time making it.
I hope you looked at Richards's blog to see his completed version.

I shall post mine tomorrow. Today I am battling ferocious hay fever and trying to sort my new computer out.

Posted by the distracted painter at 4:25 PM