My boys are out motorbike riding today . So I have taken this opportunity to paint outdoors, en plein air is the arty term, and get used to making field studies to work on later in the studio. In the field you get a far better sense of the place and the paintings from those painting, along with my photos and notes, make for great studio paintings.
I can work on more than one painting from a single en plein air study and just being out there, painting in nature, is a thrill.

I took the dog, Freddie( named after Mercury, not Kruger). To be honest, he is a 7 month old puppy, and as such, really a teen. I thought he would come, lie down and be mellow whilst I painted. Noooooooo, I was wrong. He had other plans. His agenda went as follows: bark at everything and anything, animate or inanimate(single blades of grass , waving in the wind, fair game) Bark at cars, bees, cyclists, cows, things in the distance, clouds, shadows, your own shadow, my shadow...the list went on and on. So did the incessant barking.

I snapped and popped him back on the car ( 2 meters away from me) and he was fine. So, I opened the windows, ties him to the carseat and settled back down to paint. Then he decided  NO, and barked at me. Loudly and with intent. So I hauled him out again, tied him to the fencepost in the shade and told him he was a good boy.I lied, but it was worth a shot.

This was not the peaceful experience I was anticipating at all!! I decided to carry on regardless and tuned him out ( mothers of small children can do this after years of practise)..and he settled down, ate the grass and chilled out in the shadow of the fencepost.

Later on, when I was packing everything into the car , he sat on my painting! He now has a cadmium yellow left paw and tail and a blue nose!!!

I thoroughly enjoyed meeting some of the new home owners on McGregors road and had a brief chat with them. They too love this view and we agreed it was worthy of a painting. I shall post the studio painting when it is done, but till then, a bit of evidence of the days painting events.

Aren't you glad there is no sound with this!!!! 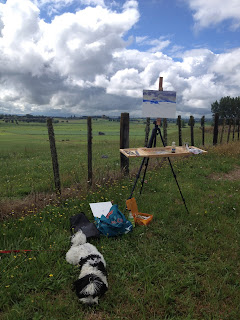 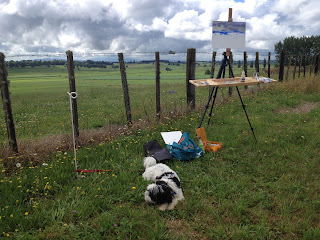 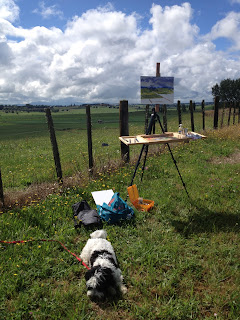 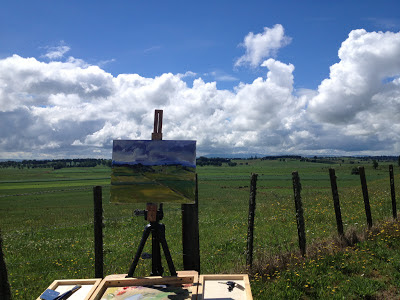 Posted by the distracted painter at 4:37 PM